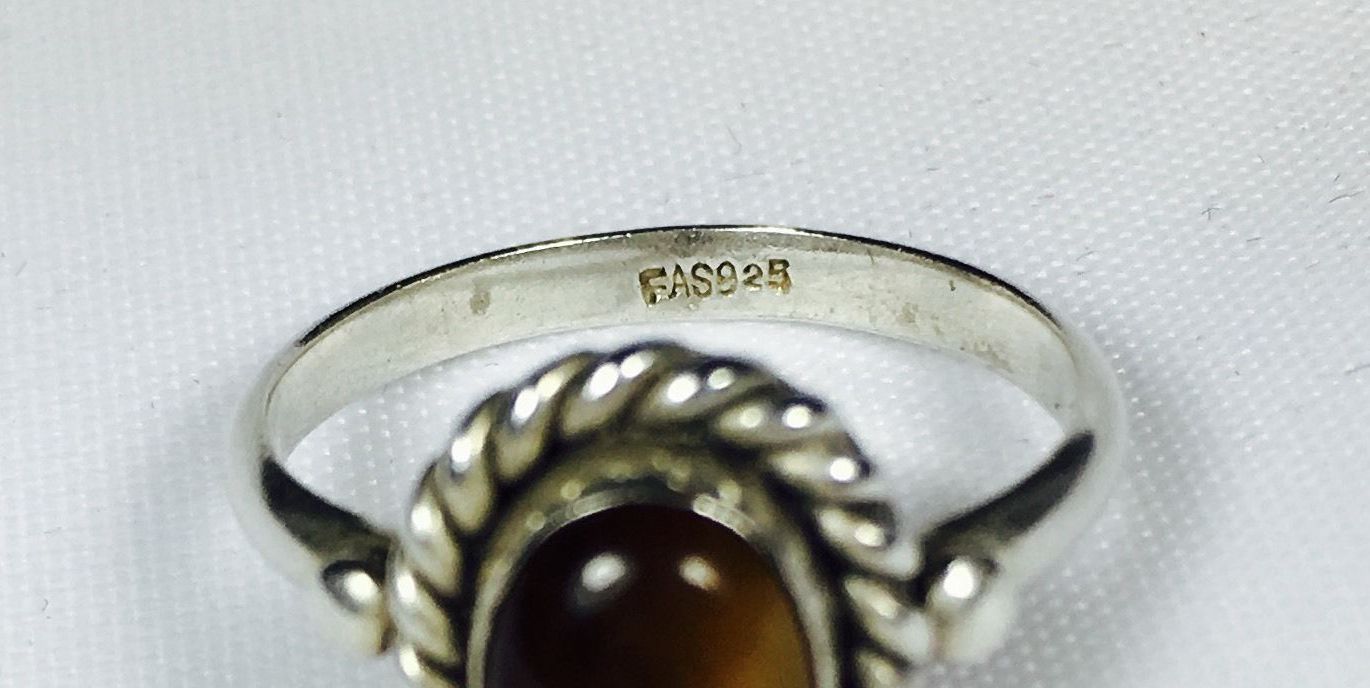 FAS is not Fused Alloy Silver. What the FAS letters stand for and who the manufacturer actually was brought up during a jewelry discussion relating to an item in question. An online article was pointed to FAS being identified as Fused Alloy Silver by a Chinese seller or sellers on items that were found to be solid sterling silver. There is also confusion with it being Fantastic Antique Silver Company. Its very easy on the internet for one blog posting to be picked up and followed by all who also seeking information. Soon everyone follows that lead and it appears to be a 'fact' to the point that all jewelry marked FAS is now said to be made by Fused Alloy Silver or the Fantastic Antique Silver Company when you do an online search.

· FAS is an international trademark for :

Designs by FMC are wholesale designers of Jewelry, namely bracelets, pendants, earrings and rings and costume jewelry since 1993. Their jewelry is manufactured overseas and imported back for sale in the US and sold by mass merchandising channels like HSN, Amazon and their own web site. In addition to sterling silver this maker also is a large producer of gold and silver plated fashion jewelry also marked FAS but without the metal fineness noted. This is not saying an overseas maker did not steal their trademark and use it on fake silver as one particular blog has alerted readers. However it cannot be assumed all pieces with the FAS trademark is one and the same as the alleged Fused Alloy Silver company by Chinese sellers. There is a very similar FAS trademark in the Chinese registered trademarks database without the horizontal line across the ‘A’ which may be confused with the US maker so pay close attention to how the 'A' looks on the mark. 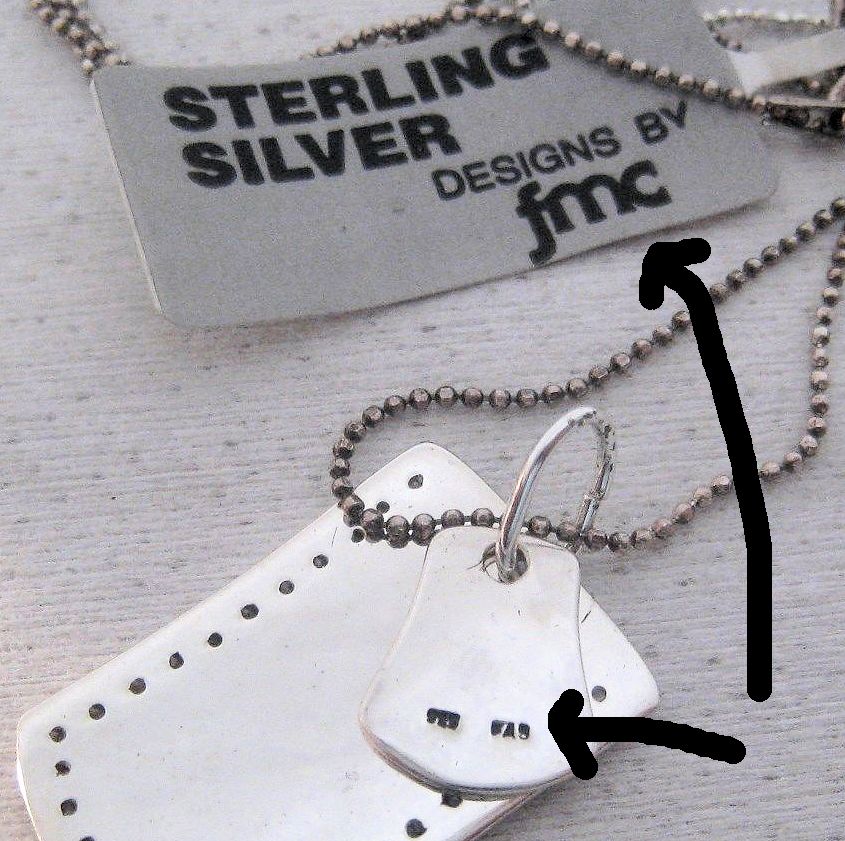 Best way to acid test silver is with 18K acid, if positive for 925 or better color will turn sky blue.
MorningStar Designs 05/26/2022, 23:52
Correction:
Regarding the 1906 Act, there is nothing in it that says an item can be described as having "sterling" plating. That got cut and pasted incorrectly. The Act emphatically states nothing can be marked on an item, it's tag/label or container it comes in with "Sterling." if it isn't solid sterling.

I interjected that anyone can verbally describe something as being sterling plated, but only as their opinion. See below on silver in plating.

Here's the funny thing. Silver plating uses pure (higher than sterling) silver. It's the quantity mixed with cyanide that determines the quality of the plating. This quantity is not standardized, other than being between 25-40g silver per 125g cyanide. Items I've bought that have been described by the seller or manufacturer as "sterling plated" have obviously been plated with a higher concentration of silver. But the use of "sterling" with "plated" is informal and subjective. In no way precise or regulated.

Except for the single "article" about FAS standing for Fused Alloy Silver, writen by a woman with a Bachelor's in journalism and specializing in fashion. Neither of those qualifies or even indicates fine metal mark expertise.
I have been researching sterling marks for years and am a member of more than one group that works to identify marks, as well as on a forum for the same. There is no such designation as "Fused Alloy Silver." The author either passed on incorrect information given to her or made a strange assumption.

It is indeed illegal to use "925" for anything other than solid sterling, per the US 1906 Precious Metals Marking Act. It states that anything plated cannot be marked "sterling" etc. It can be described as using sterling plating, but no mark is allowed. An additional section goes into details on all things plated.

Another very common misconception is that ".925" has only been used since the latter 20th century. It has in fact been used in the US since around 1856! "Sterling" or "Silver" was not a guarantee of the content until the 1906 Act that included the use of the word Sterling or an abbreviation of it was only for 92.5% Silver. "Silver" still isn't a regulated term. The 1973 Hallmarking Act in Versailles included Italy, the US, Britain... dropped the "." and changed the font a bit. So pieces marked ".925" are likely pre-1973. Of course some people continued to use their molds with that stamp until they broke before changing that.
And since most other countries have chosen this to be the silver content standard for sterling.
Japan still has theirs at 1.000 Although most of their jewelry is marked ".990" or thereabouts because pure silver is too soft for jewelry.
Maya 05/25/2022, 22:40
JS: I've had a brownish-red or color other than red when my sterling acid was bad. It goes bad fairly quickly. Whenever I use it, I first test the test, LOL. I have a scrap piece I know is 925 silver. If that doesn't show blood red, then it's time for new acid. Just a possibility!
Maya 05/25/2022, 21:50
All my experience with FAS is very good. It all tests for sterling 925 and all the stones are of a very good quality CZ's. The brand has been around for at least 30 years because that is how long I have been collecting it. I recommend it.
Sue 03/23/2022, 13:08
The only problem with MS's comment is, that it is illegal to stamp plated jewelry 925 since 925 stands for exactly what it is.

js 01/27/2022, 15:29
I recently acid tested something labeled as fas925. I tested it several times and it kept coming out a brownish red which would indicate about 80% silver instead of dark red (92.5% silver which is sterling). So perhaps, at least in this particular case, the Sterling Silver was mixed with an alloy, making it only about 80% silver instead of 92.5%. I don't think this was just plated with sterling because it was scratched several times on a scratch stone to do the acid test with the same result.
Elayne 12/19/2021, 14:54
I recently ran upon a "FAS" ring. It is INDEED Sterling. It is marked 925 FAS on one side, and on the other, it is marked Thailand CZ. I acid tested it to be sure, and it acid tests as 925 Sterling Silver as well.
Stacy 11/26/2021, 18:45
Thanks for this information.I inherited a ton of jewelry, some real and costume jewelry that I'm researching and learning the history of which is my favorite hobby.I just want to know if I have something that is very valuable and learn more about where and who made all of it.
Tina 01/22/2021, 20:17
Write a review