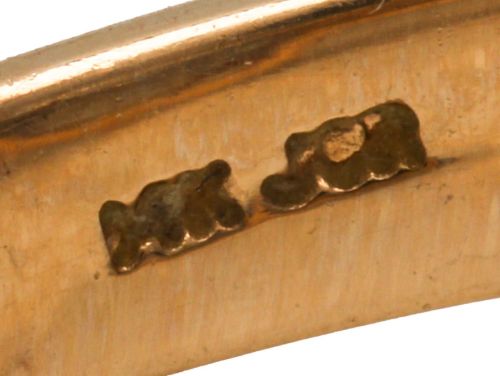 Here I go again...my pet peeve is Google misinformation and everyone just copying one another. Ok make that two pet peeves. When you search for the owner of trademark JCR the seemingly unanimous answer is John C. Rinker. You will find that not only individual sales listings but large platform sites like Etsy, Ebay and EBTH, who touts themselves as the premier platform, all sellers are advertising their jewelry as something it isn't. Their titles state "a rare John C Rinker, or "hand made by John C Rinker and made by "famous designer John C. Rinker". When you google John C. Rinker you come up with a page with his name and his initials JCR and a quick scan shows he was a jewelry designer. You can read about him here http://blog.petersuchyjewelers.com/2013/07/about-john-c-rinker-jcr-jewelry-master-jeweler/. So far so good here's his name, the letters JCR, its mentioned he was a designer and every listing you looked at is selling a JCR item is using his name so there's the maker's match, right? Wrong......What is not clear is that buried in the above linked article that although John spent his career as a designer, he designed under other business' names and not his own. He never featured or marketed his own branded jewelry until he owned the shop John C. Rinker Jewelry in Baltimore MD. The article goes on to explain his business was a repair shop where "patron's brought their jewelry to Rinker for expert repairs. He restores antique pieces made of platinum, gold or silver". He did dabble in bespoke custom designed pieces but "It is interesting to note that while this artisan does not design and create collections of his works, he does feature examples of his work" in his work shop. When a Federal trademark search is conducted under John's name there is no filing for his own mark under his or his business name. So the question still remains, who really does own the JCR trademark?

Here is the federally filed data for the owner, JAM CREATIONS, INC. A mass merchandiser / manufacturer located in New York City's jewelry district that was founded in 1989. https://start.cortera.com/company/research/k3q9pzp8k/jam-creations-inc/ . Jam Creations used the JCR letter mark from April 1996 until June 2004. There is a hand full of sellers who have attributed this mark to "designer Chuck Clemency" of Jam Creations and presented the jewelry as if it was personally made by him.....that would not be correct either. True it is his product as the principal owner but manufactured in a mass production environment and without a doubt never touched by the hands of Check Clemency. The merchandise, many of which were sold through mass marketing channels, fall between up scale to mid range for price points.

Status: Dead/Cancelled, Registration cancelled because registrant did not file an acceptable declaration under Section 8