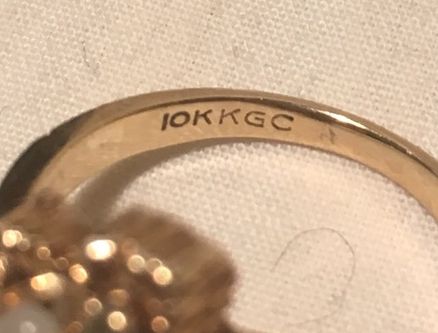 The letter mark KGC is found on many mid 1900's to the 3rd quarter of the 1900's jewelry. They do not appear to be imported goods and there seems to be quite a mystery on who the maker actually is. A number of names are associated with the mark mainly the Kimberly Gem Company in the Jeweler's Building on 47th Ave New York City.

Another name brought up is maker A H Schreiber, Providence Rhode Island, in business 1897 -1910 as they are listed as using the trade name "Kimberly". However we can rule them out automatically as a possibility as there is a large quantity of KGC marked jewelry and A.H. Schreiber was only in business 13 years around the turn of the 20th century and all KGC items are mid century to modern era.

In a 1904 Jeweler's Circular book, "Kimberly Gem" was listed as a subdivision of Albert Lorsch & Co, at 37 Maiden Lane, NYC. It's not listed with the "Co" at the end though. They are noted as manufacturers of jewelry set with imitation and synthetic stones but no mention of the business after 1922 so this option can be excluded too.

The Parker Pen Co also used the brand name Kimberly, along with Towle Silversmith's but neither of the companies entered the trademark Kimberly for use with jewelry.

So from the above information collected on the trademark of KGC which was noted on an online site to be registered in 1951, under the Kimberly Gem Co address at 62 West 47th Street, New York. When you try to verify this information there is no record of any legal filings under this name at all, never mind in 1951. There is no listings in the JCK under Kimberly Gem Co so there is no information to go on of its existence beyond posts mentioning it's name. Did they even exist and where is the documentation to prove that the Kimberly Gem Co used the mark KGC? One post mentioned a finding filed in 1951 with a link that was not active. That was the only hint as to where to find this information. The inactive link showed a trademark registration number that started CA which tells us that it is a Canadian registered mark. With this hint a lookup was done in the Canadian trademark database and there it was located...the verification needed to document the business's name, location and years that is was in business. The KGC letter mark is also used without the background cartouche.

14 - Precious and semi-precious metals, and jewellery